This is Africa and in many African cultures, aunties provide counseling to their young nieces as they age to adulthood. But in African tribe, the aunt plays more sexual role in the marriage of her niece and this practice remains till date. See the tribe below. 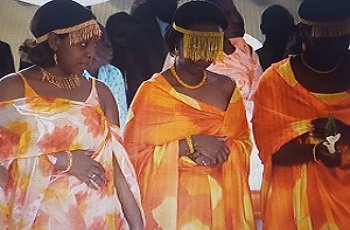 But for the Banyankole people of Southwestern Uganda, the aunt had more than the above especially in marriage. The primary responsibility of the aunt was to confirm that the groom is potent and that the bride has defended her virginity before the marriage is consummated.

Like the other Bantu groups in the African continent, the origins of the Banyankore tribe could be traced to the Congo region.

Who are the Banyankole people or tribe?

The Banyankole tribe, who numbered about 400,000 people at the turn of the century in 2000, is located in Southwestern Uganda. This former kingdom is well known for its long-horned cattle, which were objects of economic significance as well as prestige. The Mugabe (King) was an absolute ruler. In this ancient tribe and according to customs still practiced in Uganda by the Banyankole tribe, the aunt of the bride must have sex with the groom as a ‘potency test’, and also test the bribe’s virginity.

Marriage in this tribe is a thing of joy and great importance as it opens a new chapter to relationships among the community. According to the Banyankole tribes tradition, when a girl gets to the age of 8 or 9 years, it is the duty of her aunt to groom her for family life. The aunt teaches her every single thing she needs to know about her role as a woman but most importantly as a wife. They consider slim physique women as unattractive but prefer fat women, whom they see as sexy. So when a girls gets to the ages mention above they are required to go through a fattening process where they are forced-fed with millet, beef, and milk. This is usually done to speed up the weight gain of the girls so they can attract a husband.

In this tribe also, it is the duty of the Banyankole father to find a wife for his son as he pays the bride wealth as well. This consists of some cows, goats and pots of beer, depending on how rich the person is. Once the bride price is paid, the marriage preparations begin.

Lastly, since virginity is the marriage standard for the girls of the Banyankole tribe, every bride must be tested by her aunt to confirm her virginity before the marriage. If she passes the test, she is found worthy but if a girl is found to have failed the virginity test, she is face with death penalty or ostracisation from the society.

During the act of having sex with the groom, the aunt learns all the groom sexual tricks as well as favorite styles so that she can gift her niece with pointers on what the groom likes sexually. This is believed to help the bride better please her husband in the marriage. Although, this outdated practice may sound weird but it shows how the people of Banyankole hold virginity in high esteem. The test might also include the aunts watching or listening as the newlyweds have sexual intercourse.