Threat of volcano eruption in the Philippines forces thousands to evacuate

A small volcano near the Philippine capital belched a dark plume of steam and ash into the sky in a brief explosion Thursday, prompting officials to start evacuating thousands of villagers from high-risk areas. The danger level of the Taal Volcano is rising and further eruptions are possible. See more details here. 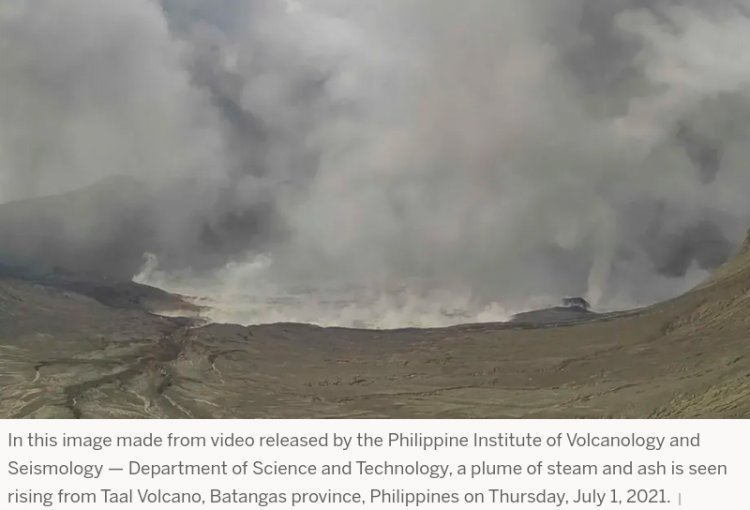 Taal erupted in January 2020, displacing hundreds of thousands of people and sending clouds of ash to Manila, about 65 kilometers (40 miles) to the north, where the main airport was temporarily shut down.

Despite the name, the Taal Volcano in Batangas, Philippines, is one of the world’s smallest active volcanoes at only 1,020 feet tall, reports The Associated Press. Taal’s small size does not make it harmless, though, especially since it is located only 45 miles south of Manila, the capital of the Philippines.

What’s happening with the Taal Volcano?

The recent gas and steam eruption of the Taal Volcano is referred to as a phreatomagmatic eruption. Water on the surface of the volcano’s main crater came into contact with magma inside the crater, resulting in gas and vapor, says NBC News.

WATCH: Phreatomagmatic eruption of Taal Volcano from 3:16-3:21 pm on Thursday, July 1, as seen from the Main Crater station | via @phivolcs_dost pic.twitter.com/z6ZFnlIDp5

So far, no volcanic earthquakes or volcanic sulfur have been detected, says the AP.

How many people are being forced to evacuate?

Five high-risk villages near the Taal Volcano were evacuated. About 15,000 people are evacuating the area, taking their belongings in cars or on motorcycles, says NBC News.

Will the volcano erupt again?

“We’re just raising the alert because something is happening and it can lead to a higher activity,” said Renato Solidum of the Philippine Institute of Volcanology and Seismology, per Al Jazeera.

The Philippines lies along the Pacific Ring of Fire, a region prone to earthquakes and volcanic eruptions, says the AP.

How to Delete your Google Internet History and Stop people from tracking...