So many Bizarre Culture exists around the world that still generates some controversy and that can be said about this South American tribe in Brazil that still buries their dead by eating their flesh! Here we present to you the Yanomani people. See more details below. 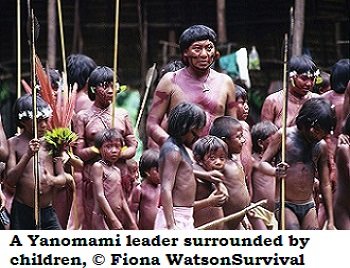 The yanomami tribe in South America, also known as Yanam or Senema are mostly found in Venezuela and some parts of Brazil. They speak the Xiriana language and live in the remote forest of the Orinoco River basin (Southern Venezuela and Northern Brazil). They probably numbered about 32,000 in the early 21st century.

You will be amazed to note that the yanomami people practice the slash-and-burn agriculture method and live in small, scattered, semi permanent villages. They supplement their crop of plantain, cassava, tubers, corn, etc and other vegetables with gathered fruits, huts, seeds, grubs and honey.

Like most tribes on the South American continent, they must have migrated across the Bering Straits between Asia and America some 15, 000 years ago, making their way slowly down to South America.

SEE MEN WHO WERE CASTRATED BY THE CHURCH SO THEY CAN SING BETTER THAN WOMEN!

The yanomami tribe first came in contact with outsiders in the 1940s when the Brazilian government sent teams to delimit the frontier with Venezuela. Soon the government’s Indian Protection Service and religious missionary groups established themselves there. This influx of people led to the first epidemics of measles and flu which many yanomami died.

WAY OF LIFE OF THE YANOMAMI TRIBE

The yanomami people live in large, circular, communal houses called yanos or shabonos. Some can house up to 400 people. The central area is used for activities such as rituals, feasts and games.

Each yanomami family has its own hearth where food is prepared and cooked during the day. At night, hammocks are slung near the fire which is stoked all night to keep people warm.

The yanomami people strongly believe in equality among people. Each community is independent from others and they do not recognize “chiefs”. Amy decisions are made by consensus, usually after long debates where everybody has a say.

The yanomami tribe has a very weird burial ritual akin to cannibalism called Endocannibalism. This is the said to be the practice of eating the flesh of a dead person from the same community, tribe or society.

They believe that the soul needs to be protected after the body dies. They see it that the soul can only rest properly and make its transition only when the body has been burned and the body eaten by the living relatives.

Unlike the conventional burial ceremony of interment, this native Indian tribe burns the body of the dead person and paints their faces with the grime from the burnt body. They sing and cry to express their grief over the loss of the relative.

In the second phase of the burial, they gather the bones remaining from the burning of the bodies and turn them into powder mixing it with ashes from the burnt bodies.

They mix this into banana which is used to make banana soup, a local delicacy common to this tribe and give to everybody to eat.

They believe that completing this burial ritual is the only way the soul can attain eternal peace.

But in a case where an enemy kills the relative or village ,member, only the women eat the ashes and after then a form of revenge is exacted on the culprits , however the ceremony is done on the same night the villagers are sent to revenge through a raid on the enemy territory.

I cannot conclude this interesting topic without that about the spirits in the life of the yanomami people. In fact the spirit world is a fundamental part of the yanomami life. Every creature, rock, tree and mountain has a spirit. Shamans control these spirits by inhaling a hallucinogenic snuff called yakoana.

N.B: The Pixture above is a Yanomami leader surrounded by children, © Fiona WatsonSurvival

YANOMAMI TRIBE BURY THEIR DEAD BY EATING THEIR FLESH

Npower Backlog Stipends Payment: A Total of 9066 Batch A & B Volunteers...

How to Spice up your Instagram feed with Music and Reels