See the Alkaline African Lake that Turns Animals to Stone

This African lake situated in Tanzania is full of wonders. it is Alkaline in nature and turns every Living Animals that comes in contact with its waters to STONE! 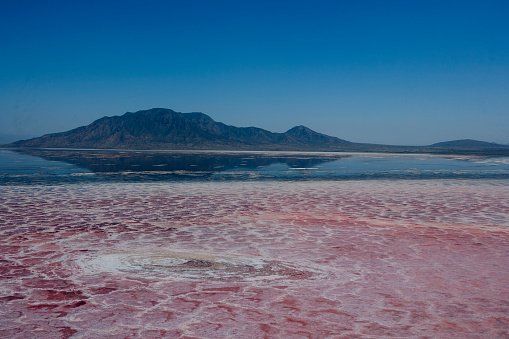 Lake Natron is a salt lake in the Arusha Region in Tanzania. It is in the Gregory Rift, which is the eastern branch of the east African rift. The lake is within the lake Natron basin.

The lake is one of the two alkaline lakes in that area of east Africa; the other is Lake Bahi. Both can be said to be terminal lakes that do not drain out to any river or sea; they are both fed by hot springs and small rivers. As shallow lakes in a hot climate, do you know their water temperatures can reach as high as 106 degrees Fahrenheit (41 degrees Celsius)

Do you know Lake Natron is fed principally by the Southern Ewaso Ng’iro River, which rises in central Kenya, and by mineral-rich hot springs? It is quite shallow, less than three meters’ deep, and varies in width depending on its water level. When I told you Lake Natron is a salt lake, what I meant is that water flows in, but doesn’t flow out, so it can only escape by evaporation. Over time however, as water evaporates, it leaves behind high concentrations of salt and other minerals, like at the Dead Sea and the Utah’s Great Salt Lake in the U.S.A.

The point to note here is that unlike other lakes, though, Lake Natron is extremely alkaline, due to high amounts of the chemical natron (a mix of sodium carbonate and baking soda) in the water. The water’s pH has been measured as high as 10.5 – nearly as high as ammonia!

The lake turns any animal that come near its waters to STONE! It also possesses a bright red colour, which acts as a warning signal, cautioning most life forms to stay away. The lake gets this reddish hue from salt-loving microorganism called halophiles that thrive in its alkaline waters and produce reddish pigments, which colour the lake’s salt crust red. The salty crust, however, changes over time, giving the lake a different appearance each time.

Animals that die here can turn into calcified statues over time, because of the unique chemical makeup of the lake, which encrusts the carcasses with layers of salt, sodium carbonates, and sodium bicarbonates.

Inhostitable to Most, Thriving to Few

The lake has been listed on the Ramsar List of Wetlands of International Importance due to its unique biodiversity and has been recognized as an important ecoregion by the World Wildlife Fund. This Lake will definitely make it to the list of most unique places in the world!