Do you that Married women in one of the African tribes in West Africa are allowed to date other men even in there own matrimonial homes..yes, this is true. The Wodaabe tribe is a Fulani tribe in Niger, West Africa. Moreso, the males in the tribe are regarded as very vain because they believe that they are the most handsome set of men and they always carry mirrors. See more details below. 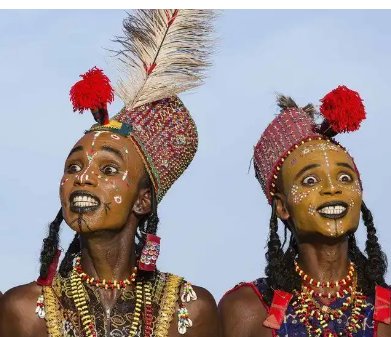 Do you know Wodaabe means “people of the taboo” - these are subgroups of Fulani and Tuareg, who have migrated around this part of Africa for centuries.The Wodaabes mostly live on milk and ground millet, with yoghurt, sweet tea and occasionally the meat of a goat or sheep.

The first marriage of any Wodaabe man or woman is usually arranged by their parents from a very young age. But, the Wodaabe don’t practice monogamy, and there is no shame in married men and women having lovers, though strict taboos dictate you may only have one marriage partner at a time. Wodaabe men perform the "Yaake" ritual dance as part of the Gerewol, a week-long courtship ceremony in Chad. It must be one of the only African cultures which allows girls to take the lead in choosing their betrothed and even married women have the right to take a different man as a sexual partner.

Men start preparing for the Gerewol at daybreak. From early on there is a mounting sense of anticipation, as some years see more than 1,000 people gather for the festivities. The men paint their faces with make-up made from clay, stones and animal bones crushed and turned into a paste. Some men were said to paint their lips black with chemicals from batteries to emphasise their white teeth.

SEE ALSO: The Story of a Japanese Prisoner Who Used Soup to Escape from prisons

Most participants will shaved there hairline to elongate their forehead and be practising the eye-rolling, teeth-baring aspect of the dance, which shows off the features Wodaabe women find desirable.Preparations for the Gerewol festival are communal and everybody pitches in to help the men look their best. The hours the men spend on their clothes and make-up has led to the Wodaabe being called "the vainest tribe in the world".

Some make-up is believed to have magical powers and the Wodaabe go to great lengths to secure it. The orange face powder is only to be found beside a special mountain near Jongooria in central Niger, and some clans must undertake a 1,400km (870-mile) round trip on foot to secure a supply.

Gerewol only happens once a year, so the pressure and anticipation is huge and finding a wife is so important. Wodaabe men make some last-minute adjustments to their costumes for the night’s festivities, checking their reflections in brightly coloured pocket mirrors - indispensable accessories for the Wodaabe male. They look at them constantly, a bit like some people and their smartphones. The Gerewol festival is a gruelling test of endurance for the men, who dance for hours in stifling heat in the hopes of impressing a woman.

Although the Wodaabe are a patriarchal society, when it comes to sex, the women are in charge. It must be one of the only African cultures which allows girls to take the lead in choosing their betrothed and even married women have the right to take a different man as a sexual partner.

Lasty, like i said earlier, The tribe holds an annual festival called the Gerewol during which men dress elaborately, wear make-up and hold a beauty pageant of some sort. During the festival, men dress to impress the wives of other men.

The tribe is a polygamous one hence the wife stealing is widely accepted. In spite of this, some men do not wish their wives to be stolen, and so do not allow them to participate in the festival.

Hope this article interest you more, please share to others who may want to be informed too.

Npower Batch C October Payment - Stipends will be Paid when All Payment...