Mourners gathered Wednesday for the funerals of students and staff killed by a teenage gunman at a Russian school, a tragedy that spurred calls for tighter controls on guns and the internet. 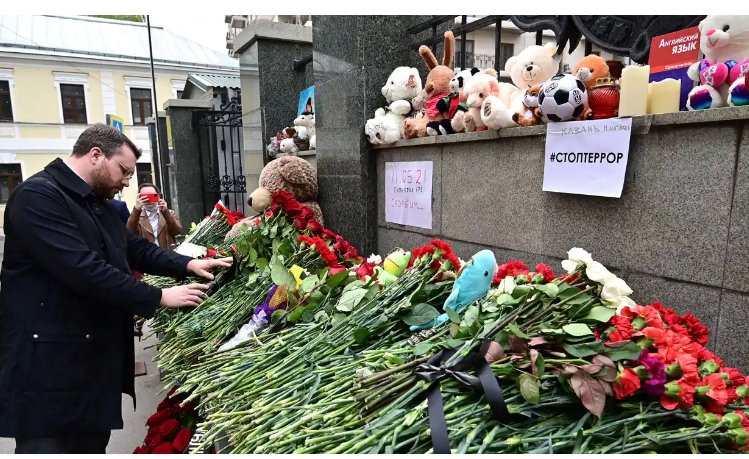 After Tuesday’s attack left seven students and two staff dead at the school in the central city of Kazan, President Vladimir Putin called on lawmakers to toughen gun control laws and other senior officials demanded stricter regulation of the internet.

Flags were flaying at half-mast throughout Kazan, the capital of the majority Muslim Russian republic of Tatarstan.

Family members wearing black and students of Elvira Ignatieva — a 25-year-old English teacher who reportedly died while shielding pupils from the gunman — laid flowers and read the Koran at her grave during a funeral ceremony.

“My niece was like a shining star: she took off, lit up and faded away,” her 62-year-old aunt Anna Ignatieva told AFP, crying and wearing a black scarf.

The 19-year-old gunman opened fire on Tuesday at School No. 175 in Kazan, armed with a shotgun and at least one improvised explosive device.

He was identified as Ilnaz Galyaviev, a former student at the school.

Panic spread throughout the building, with some students jumping from windows to escape, and the gunman was detained within about an hour.

Galyaviev, who was recently dismissed from a local technical college for poor grades, was shown in interrogation footage leaked online claiming he was God and that he had “a monster” inside him.

He was due to make a first court appearance on Wednesday.

‘Huge and unexpected loss’
All the children killed were in Ignatieva’s eighth-grade class, so between the ages of 13 and 14. The second staff member killed was a teaching assistant for younger students.

At least 18 children were also wounded in the attack, including some who sustained injuries while attempting to escape the school building, the RIA Novosti news agency reported Wednesday, citing health officials.

The agency said that eight students were being treated for gunshot wounds and that two were in a critical condition, with a total of 21 people in hospital.

Dozens of mourners carrying flowers and soft toys congregated outside the school on Wednesday to commemorate the dead.

“This is a huge and unexpected loss,” Irina Krasnikova, 42, told AFP.

“We live in such a nice city. It’s hard to believe this happened to us… It didn’t happen to my children, but it is so painful, it’s hard to speak.”

Calls for internet controls
The shooting also prompted calls among Kremlin-friendly lawmakers for even tighter regulation on the internet, which opposition figures in Russia say authorities use to suppress political dissent.

The speaker of the lower house of parliament, Vyacheslav Volodin, called on lawmakers to discuss the possibility of removing internet anonymity, requiring users to identify themselves to be allowed online.

Officials have claimed that young Russians are being increasingly exposed to negative influences online, especially from the West.

Buying firearms legally is also not easy, although it is possible to register hunting rifles.

Officials noted that Galyaviev had undergone security and psychological tests to gain a license for the weapon.

Public shootings are rare in Russia in comparison with the United States, but Tuesday’s attack follows some similar incidents in recent years.

In November 2019, a 19-year-old student in the far eastern town of Blagoveshchensk opened fire at his college, killing one classmate and injuring three other people before shooting himself dead.

One year previous, another teenage gunman — reportedly using the same weapon as Galyaviev — killed 20 people at the Kerch technical college in Crimea, the peninsula Russia annexed from Ukraine in 2014.

INEC Continuous Voters Registration -How to Check your PVC Status