The standard of living of an average Nigerian under President Muhammadu Buhari government is steadily declining every day as prices of food continue to skyrocket daily. The rising cost of doing business as well as the free fall of the nation's currency against the U.S. dollar to an all time low of N575 makes the issue a serious one to contend with. How will the nation savage this and who will help the common man? 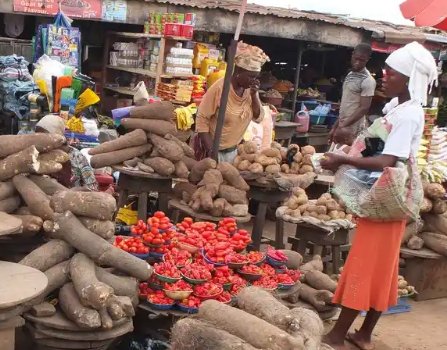 Without any doubt, the current increase in prices of goods and services is tied to low farming activities, low productivity as a result of the worsening insecurity, especially in the Northern region. So many farmers flee their farms out of fear for their lives as bandits, Boko Haram, and herdsmen attack communities and kidnap families.

The current realities are forcing families into hunger, as an average Nigerian who could afford to feed three times in a day are now struggling to feed twice or less, because of the economic situation in the country, especially in the Northern Part of Nigeria.

Point to note is that, On a monthly basis, prices of food items appear to be increasing in major cities in Nigeria. For example, the prices of flour products such as ‘bread’, grains such as ‘rice, beans, garri’, and regular beverages have experienced unimaginable hike in price within the last one month if compared with previous months within the year.

Millions of working-class Nigerians can no longer live a decent life on their income not to talk of those earning lower than the minimum wage. The question that bothers most Nigerians is, “how does a Nigerian who earns a minimum wage of N30,000 survive with the current hike in the price of food? How do most families feed?” Sadly, these questions remain unanswered.

The country’s national minimum wage is N30,000 per month, mainly applicable to civil servants as some private sectors pay as low as N15,000 to workers. Also, many state governments are yet to implement the new minimum wage.

Valentine202.net  interacted with some Nigerians who expressed their sadness over the situation, calling on the government to act immediately. A worker simply identified as Gloria said it’s been hard for her to feed as a spinster since the change in price.

Mr Dapo, a civil servant, lamented that he has two kids and is finding it hard to cater to them. He said, “I go to work every day and I cannot boast of my salary taking care of my family anymore. The lunch pack for my kids has reduced because even biscuits have increased. The other day, I went to buy gas for N10kg, it has increased too. My wife keeps complaining that the money she uses to feed the family for a month can barely sustain us for two weeks. What does Buhari want us to do? Is this the change he promised us? I don’t think we have anything like average Nigerians, it’s either you’re poor or rich under this Buhari government.”

One Mr Akin who works at a private company in Wuse 2 lamented that these days, he misses lunch break at work twice in a week because of the increase in prices of stuff in order not to be stranded before the end of the month. He said, “I wouldn’t lie to you madam, things are becoming worse oh! Imagine lunch I buy every day at N500 is now N700 and its even in smaller quantities. The woman in the canteen does not even sell N100 plantain; it starts from N200. How does Buhari want responsible workers to live a good life? As a young man, now I can’t even think of having a girlfriend not to talk of taking her on a date because of how expensive things are. This government just wants us to struggle and not be able to even live a decent life. I don’t even know what the government is doing to stop this, but they need to help us regulate these prices. We can’t live like this till 2023. Please help us talk to them, at least they’ll listen to the media”.

Recall that on October 1st, President Buhari during his Independence Day speech blamed the middlemen for the rise in food prices, stating that the middlemen have been buying and hoarding these essential commodities for profiteering. He directed the Ministry of Agriculture and Rural Development to rehabilitate the National Food Reserve Agency and also work with security agencies, the Nigerian Commodity Exchange, and the National Assembly to find a lasting solution to these disruptive and unpatriotic hoarding activities.

The president said, “To further enhance food production, we have completed several new dams and are in the process of rehabilitating several River Basin Development Authorities to enhance groundwater supply for rainfed agriculture as well as surface water for irrigation agriculture”.

The House of Representatives, days ago also set up a special committee to conduct an investigative hearing with all critical stakeholders in the country and carry out the root cause analysis on the rising cost of food items. But if the government fails to find a lasting solution to insecurity issues such as bandits attack in communities, herdsmen attacks on farmers and villages, the prices of food will continue to rise, and the unemployment rate will increase.

The current realities have caused businesses to shut down over the cost of production. Experts believe the trend has an adverse effect on unemployment rate which is already high.

Valentine202.net observes that unemployment chain is already too high but the number of companies leaving Nigeria due to insecurity and lack of investors is pushing more Nigerians into unemployment while universities still churn out graduates.

Investors will consider countries where the security of their staff, property is guaranteed. Now is the time to act right and save the Nigerian economy. We must make a better nation and salvage self from this economic doom!

Beware of these Netflix scams that are running rampant online

How to Know Who's Tracking You Through Your Phone And Codes To Stop Anyone...