The North Sentinel Island is a secluded island in the Indian Ocean, where a tribe of indigenous people attacks anybody who attempts to visit. The island has been named both the hardest to visit and the most dangerous on the planet. 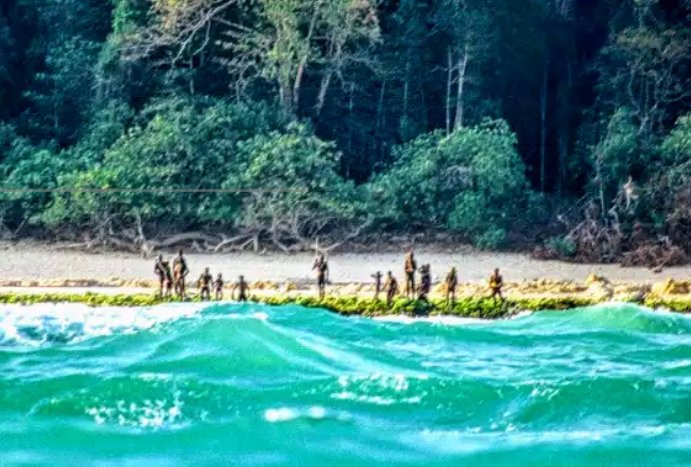 The story of this island will surely scared you from attempting any visit or contact with the people of these island. The Sentinelese, as they are known, live on one of the Andaman islands, an archipelago off the coast of Myanmar (Burma). Their home, North Sentinel Island, is governed by India, but almost no one from outside the tribe has ever set foot there.

The Island lies 36 km west of the town of Wandoor in Soutn Andaman Island, 50 km west of Port Blair, and 59.6 km north of its counterpart South Sentinel Island. It has an area of about 59.67 km and a roughly square outline. North Sentinel is surrounded by coral reefs, and lacks natural harbours. The entire island, other than the shore, is forested! Sure you wouldn't want to visit such a scary place, do you?

One thing you should note also is the that the Andaman and Nicobar Islands Protection of Aboriginal Tribes Act of 1956 prohibits travel to the islands and any approach closer than five nautical miles (9.26 km) in order to prevent the resident tribespeople from contracting diseases to which they have no immunity. The area is patrolled by the Indian Navy.

So it is obvious the island belongs to the South Andaman administrative district, a part of the Indian union territory of Andaman and Nicobar Islands. In pratcice,  Indian authorities recognise the islanders desire to be left alone and restrict their role to remote monitoring; they do not prosecute them for killing their visitors. So the island is a protected area of India.

I told you this island is a forbidden place for anyone or visitor to go, so you can see and read for yourself. The outside world first made contact with the SentinelSentinelese in 1867, when an Indian merchant ship crashed into the island. Their presence was not well received by the locals, who attacked them until they were rescued by another ship. Over the next 20 years the British occasionally made contact with the island, but after 1887, there was no contact with the Sentinelese until 1970, when some Indian anthropologists were sent to the island and spotted by the locals on the beach.

Since then, practically every encounter with the Local people has ended in disaster. The tribe has attacked everyone who has tried to visit. That includes a National Geographic crew in 1974 who suffered arrow injuries. More so, in 2006, two Indian fisherman fell asleep as their boat floated to the island and were killed by the natives.

Only recently, on November 2018, John Allen Chau, a 26-years-old American Missionary,  trained and sent by Missouri based All Nations, was killed during an illegal trip to the restricted island, planning to preach Christianity to the Sentinelese. Seven individuals were taken into custody by the Indian police on suspicion of abetting Chau's ilegal access to the island. Entering a radius of 5 nautical miles (9.3 km) around the island is ilegal under Indian law. Fishermen told police that they had seen the tribespeople dragging Chau's body around but the authorities had not been able to independently verify his death. The case is being treated as murder but there has been no suggestion that the tribesmen would be charged.

Lastly,mine visit from the Indian anthropologists in 1991 did not go peacefully. But now, to protect the tribe from the diseases of the outside world and to protect visitors from arrows and javelins,  no one is allowed to visit. This will mostly remain the case for a long time!

See the African tribe where Bride’s aunt must sleep with the groom to...