The naira on Monday suffered a major setback, losing N5 to close at N550 to dollar at the parallel market. The currency has been under pressure for nearly two weeks, losing significantly at the official and parallel markets due to scarcity of dollars under a very high demand from manufacturers and foreign exchange end users. See more details below. 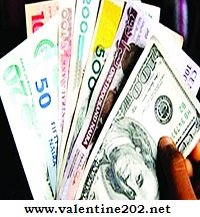 The naira exchanges at N410.51 to dollar at the official market. The N139.49 rate disparity between the official and parallel  market rates has led to massive hoarding of scarce dollars and abuse of Central Bank of Nigeria (CBN) guidelines on foreign exchange  trading.

The fall in the naira rate to this new low has been linked to dollar scarcity and forex speculators hoarding the available greenback to maximise profit.

In emailed guide to investors, the Managing Director, Financial Derivatives Company Limited, Bismarck Rewane,  said delaying of the multiple exchange rate system which had bedeviled the economy had been a subject of controversy for a long period.

“Now that it appears settled we should expect a crawling peg method and an increase in forex supply to ensure equilibrium in the market. That notwithstanding, the CBN’s attempt to mop up excess liquidity could serve as a temporary antidote to consumer price inflation which still remains stubbornly high (18.12 per cent),” Rewanne, an economist, said.

He said naira rates convergence would require adoption of a full floating exchange rate system determined by the forces of demand and supply.

The IMF insisted that restrictions on access to foreign exchange for certain categories of goods, and multiple exchange rates create distortions in both private and public sectors decision making. They discourage long-term investment, encourage smuggling and provide avenues for corruption.

Moving forward, the Fund suggested removal of foreign exchange restrictions, and a full exchange rate unification, in line with the authorities’ Economic Recovery and Growth Plan (ERGP), will help keep the parallel market premium low in a more sustained manner.

It therefore called for unified exchange rate for the naira to promote growth and attractive foreign capital.

According to the IMF,  foreign exchange backlog and shortages are intensifying Balance of Payment (BoP) pressures insisting that exchange rate unification  was imperative to reduce BoP risks. It said that fiscal deficit will stay elevated in the medium term, while additional domestic revenue mobilisation is required to reduce fiscal risks.

Npower Backlog Stipends Payment: A Total of 9066 Batch A & B Volunteers...