Mount Nyiragongo - The Volcanic Mountain that Erupted recently in Africa

Mount Nyiragongo's lava lake has at times been the most voluminous known lava lake in recent history. This mount located in the central African country of Congo DR, erupted recently and render many homeless. See all details about this mountain below.

Hundreds of homes and buildings near Mount Nyiragongo in the Democratic Republic of Congo have been destroyed, buried by lava that spewed from the volcano when it erupted on Saturday night.

The whole incident is on the news and not many people knew about the existence of this mountain not to talk about it being an active volcanic mountain. Here I have details more about the mountain and some brief news about the town of goma where the lava flow have killed many, has destroy homes and render many homeless.

Mount Nyiragongo is an active stratovolcano with an elevation of 3,470 m (11,385 ft) in theVirunga Mountains associated with the Albertine Rift. It is located inside Virunga National Park, in the Democratic Republic of the Congo, about 12 km (7.5 mi) north of the town of Goma andLake Kivu and just west of the border with Rwanda. The main crater is about two kilometres (1 mi) wide and usually contains a lava lake.

Do you know that this Mount Nyiragongo and nearby Nyamuragira are together responsible for 40 per cent of Africa's historical volcanic eruptions. 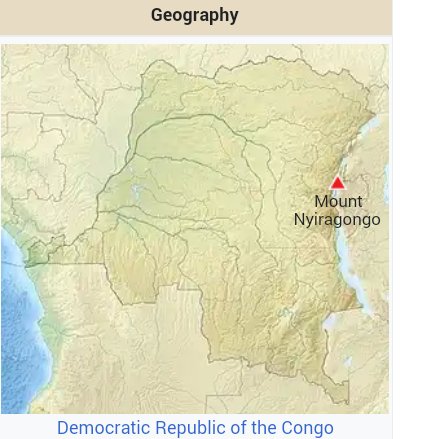 Not much is known about how long the volcano has been erupting, but since 1882, it has erupted at least 34 times, including many periods where activity was continuous for years at a time, often in the form of a churning lava lake in the crater. The existence of the lava lake had been suspected for some time but was not scientifically confirmed until 1948. At that time, it was measured at nearly 120,000 square metres (1.3×106 sq ft).Subsequent expeditions showed that the lake fluctuated in size, depth, and temperature over time.

Do you also know that Localized carbon dioxide toxicity, known locally as 'mazuku', has killed children even more recently. In locations where the gas seeps from the ground at relatively high levels, without the dispersing effects of wind, its effects can be deadly.

A government spokesman on Sunday said at least 15 people are dead, including nine who were killed in a traffic accident as they tried to flee the area and four others who died while trying to escape from a prison. It is expected that the death toll will rise once authorities reach the hardest-hit areas, BBC News reports. UNICEF said 150 children were separated from their families during the chaos, and another 170 are feared missing.

On 22 May 2021, it was reported that the volcano was erupting again.Lava approached theGoma airport and moved towards the city centre of eastern Goma. It was later confirmed by the North Kivu province's military governor that the eruption was at around 17:00 GMT. A highway to Beni was cut off by lava, and authorities urged residents from the city of Goma to evacuate, causing thousands of people to leave their homes.There was also an electricity cut across large areas following the eruption.

Thousands of people tried to outrun the volcano, escaping with whatever they could carry from their homes. Tom Peyre-Costa of the Norwegian Refugee Council in Goma told the BBC the lava was moving "pretty slow," but it "didn't stop. ... It started burning the houses." He added that already, there are humanitarian groups on the ground working to help people who have lost their homes.

Nyiragongo is a more active volcano, and earlier this month, the Goma Volcano Observatory issued a report warning that seismic activity there had increased. The last time the volcano erupted was in 2002, leaving 250 people dead and 120,000 homeless.