It is now over five centuries since the birth of an amazing and infamous man. Everyone has heard of Nostradamus – Michel de Nostradame – born on December 14, 1503, in St. Remy de Provence, in France. He was a seer, adept in astrology and astronomy, and used both sciences to interpret the visions he received in the secrecy of his study. Here at valentine202.net, we bring you Master Nostradamus – The man who saw tomorrow, it’s a master piece. Enjoy it. 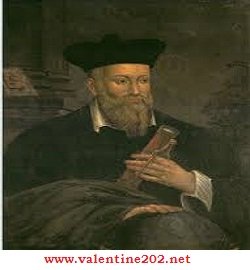 Michel de Nostredame (depending on the source, 14 or 21 December 1503 – 2 July 1566), usually Latinised as Nostradamus, was a French physician and reputed seer, who is best known for his book Les Propheties, a collection of 942 poetic quatrains allegedly predicting future events. The book was first published in 1555 and has rarely been out of print since his death.

Nostradamus's family was originally Jewish religiously as well as ethnically and racially, but had converted to Catholicism before he was born. He studied at the University of Avignon, but was forced to leave after just over a year when the university closed due to an outbreak of the plague. He worked as an apothecary for several years before entering the University of Montpellier, hoping to earn a doctorate, but was almost immediately expelled after his work as an apothecary (a manual trade forbidden by university statutes) was discovered. He first married in 1531, but his wife and two children were killed in 1534 during another plague outbreak. He fought alongside doctors against the plague before remarrying to Anne Ponsarde, who bore him six children. He wrote an almanac for 1550 and, as a result of its success, continued writing them for future years as he began working as an astrologer for various wealthy patrons. Catherine de' Medici became one of his foremost supporters. His Les Propheties, published in 1555, relied heavily on historical and literary precedent and initially received mixed reception. He suffered from severe gout towards the end of his life, which eventually developed in edema. He died on 2 July 1566. Many popular authors have retold apocryphal legends about his life

Origins of The Prophecies

Nostradamus claimed to base his published predictions on judicial astrology—the astrological 'judgment', or assessment, of the 'quality' (and thus potential) of events such as births, weddings, coronations etc.—but was heavily criticised by professional astrologers of the day such as Laurens Videl for incompetence and for assuming that "comparative horoscopy" (the comparison of future planetary configurations with those accompanying known past events) could actually predict what would happen in the future

Nostradamus's supporters have retrospectively claimed that he predicted major world events, including the Great Fire of London, the French Revolution, the rises of Napoleon Bonaparte and Adolf Hitler, the atomic bombings of Hiroshima and Nagasaki, and the September 11 attacks.

Many of Nostradamus's supporters believe that his prophecies are genuine. Owing to the subjective nature of these interpretations, however, no two of them completely agree on exactly what Nostradamus predicted, whether for the past or for the future.Many supporters, however, do agree, for example, that he predicted the Great Fire of London, the French Revolution, and the rises of Napoleon and Adolf Hitler, both world wars, and the nuclear destruction of Hiroshima and Nagasaki. Popular authors frequently claim that he predicted whatever major event had just happened at the time of each book's publication, such as the Apollo moon landings in 1969, the Space Shuttle Challenger disaster in 1986, the death of Diana, Princess of Wales in 1997, and the September 11 attacks on the World Trade Center in 2001. This 'movable feast' aspect appears to be characteristic of the genre.

Some of Master Nostradamus predictions that have come to past

By 1566, Nostradamus's gout, which had plagued him painfully for many years and made movement very difficult, turned into edema, or dropsy. In late June he summoned his lawyer to draw up an extensive will bequeathing his property plus 3,444 crowns (around $300,000 US today), minus a few debts, to his wife pending her remarriage, in trust for her sons pending their twenty-fifth birthdays and her daughters pending their marriages. This was followed by a much shorter codicil. On the evening of 1 July, he is alleged to have told his secretary Jean de Chavigny, "You will not find me alive at sunrise." The next morning he was reportedly found dead, lying on the floor next to his bed and a bench (Presage 141 [originally 152] for November 1567, as posthumously edited by Chavigny to fit what happened). He was buried in the local Franciscan chapel in Salon (part of it now incorporated into the restaurant La Brocherie) but re-interred during the French Revolution in the Collégiale Saint-Laurent, where his tomb remains to this day

Often referred to as ‘the prophet of doom’ because his visions often involved death and war, it seems that he predicted the French Revolution, the birth and rise to power of Hitler, and the assassination of John F. Kennedy. His prophecies are contained in 942 cryptic poems called “The Centuries”. A single verse is called a quatrain and 100 quatrains a Century.

What do you think of this man?