INDONESIA moves capital and seat of administration from Jakarta to Nusantara

Do you know that the city of Jakarta will no longer be the capital and administrative centre of Indonesia? This will come as a surprise to many as the Indonesian lawmakers have passed a law, moving the nation's capital from Jakarta in Java to Nusantara in the island of Kalimantan. See details below. 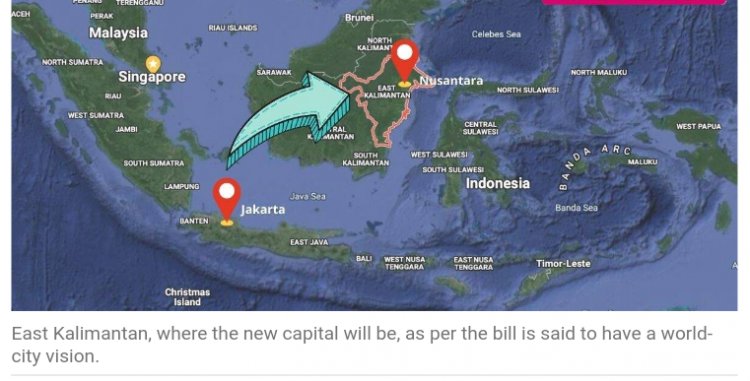 The move is a step forward in one of the most ambitious projects initiated by the country and its current leader, President Joko Widobo. I think he is keeping to his earlier promise three years ago when he vow to relocate the capital city to the province of East Kalimantan. Among the reasons are high population density and land subsidence in Jarkarta, home to more than 10 million people.

Nusantara, which the new capital is called, will be built in two districts in East Kalimantan,  so it's Penajam Paser Utara and Kutai Kartanegara, which is set to occupy about 256,000 hectares of land.

You recall that Indonesia, the world's fourth most populous country, is home to some 270 million people, consisting of about 17,000 islands. The new capital name had been selected from more than 80 options by Widodo and was chosen because it reflected Indonesia's geography, and was iconic internationally, said Suharso Monoarfa, the National development planning minister.

Some of the projects on construction at the new capital will be carried out by public-private partnerships, and the early stage of the relocation will begin this year and is expected to end in 2024. At this state, officers said,mthe government will build a presidential palace, parliament buildings, and a housing complex in the primary zone.
The movement of civil servants at the early stage must be completed before August 16, 2024.
Nusantara will serve as the centre of government,  while Jarkata would remain the business and economic centre of Indonesia,  Southeast Asia's biggest economy. It is reported that the new capital will be headed by an authority chief appointed by the president, and its level of position is equal to a minister.

Hope this post was interesting and informative?  It best we update you on this so you know Indonesia now has a new capital called Nusantara,  in East Kalimantan.

See the Sad Tales of Men Who Were Castrated So They Could Sing Better...

INDONESIA moves capital and seat of administration from Jakarta to Nusantara

See the Only African Country That Has Three Capitals Instead of One in...