Not so many of you know this story or come across it in history. During the period of British colonial rule in Africa and Nigeria, a king stood up to there tyranny and almost defeated them. He is no other than King Frederick William Koko, Mingi VIII of Nembe (1853–1898), known as King Koko and King William Koko, was an African ruler of the Nembe Kingdom (also known as Nembe-Brass) in the Niger Delta, now part of southern Nigeria. See more details below 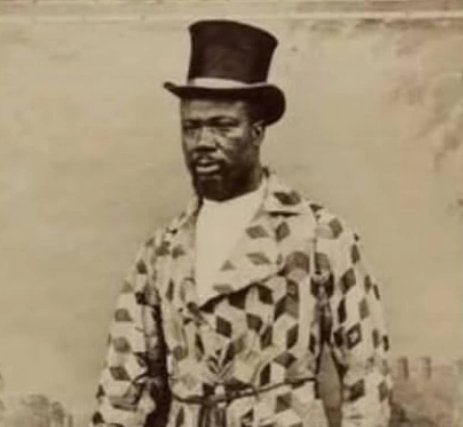 A Christian when chosen as king of Nembe in 1889, Koko's attack on a Royal Niger Company trading post in January 1895 led to reprisals by the British in which his capital was sacked. Following a report on the Nembe uprising by Sir John Kirk which was published in March 1896, finding that forty-three of Koko's hostages had been murdered and ceremoniously eaten, Koko was offered a settlement of his grievances but found the terms unacceptable, so was deposed by the British. He died in exile in 1898.

An Ijaw, Koko was a convert to Christianity who later returned to the local traditional religion. Before becoming king (amanyanabo), he had served as a Christian schoolteacher, and in 1889 this helped him in his rise to power. The leading chiefs of Nembe, including Spiff, Samuel Sambo, and Cameroon, were all Christians, and after having ordered the destruction of Juju houses a large part of their reason for choosing Koko as king in succession to King Ockiya was that he was a fellow-Christian. However, there was at the same time a coparcenary king, the elderly Ebifa, who ruled at Bassambiri and was Commander-in-Chief until his death in 1894.

With the settlement of European traders on the coast, Nembe had engaged in trade with them, but it was poorer than its neighbours Bonny and Calabar. Since 1884, Nembe had found itself included in the area declared by the British as the Oil Rivers Protectorate, within which they claimed control of military defence and external affairs. Nembe was the centre of an important trade in palm oil, and it had refused to sign a treaty proposed by the British, opposing the Royal Niger Company's aim of bringing all trade along the kingdom's rivers into its own hands

The Akassa Raid was the most important occurrence during the reign of King Fredrick William Koko in the year 1895. The cause of it was the trade monopoly in the Niger claimed under Royal Charter, granted to the National African Company in the year 1886 by the British Government; and as the best part of that Nembe trade was done in the Niger in the olden days, their sphere of action in reference to trade intercourse became much limited in consequence.
Moreover, the Royal Niger Company, Chartered and Limited, went so far as to molest and seize all trading canoes of Nembe people they chanced to see as far as the lower Ijoh [Southern Ijaw, in Bayelsa] markets, firing, and killing many of the people, even as far as to the Akassa creek which leads to the Brass Twon River. 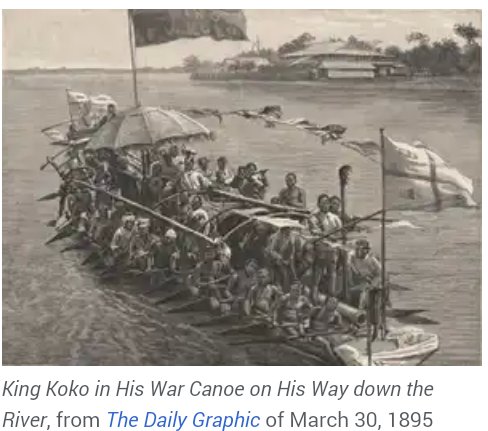 Wherefore, King Koko, the Mingi of Nembe being the supreme King invited the King of Bassambiri and the principal chiefs of both sides, with those of Okpoama and Twon to intervene in a general meeting and discussed about what to be done to better the situation. The author [Rev. Daniel Ogiriki Ockiya] was present at the meeting, and after deep and serious consideration all unanimously concluded that, "To die by the sword is far better than to die of hunger"; and under these circumstance the king, chiefs, and people took the law into their own hands and raided Akassa, the then Headquarters of the Royal Niger Company, Chartered and Limited, on the morning of 29th January 1895.

This meant that palm oil trade would be completely controlled by the British, denying the people of Nembe access to the palm oil markets. King Koko then renounced Christianity and led over 1,500 men and 22 war canoes to raid the Royal Niger Company's headquarters at Akassa in 1895.

The Royal Niger Company's property was looted, vandalised and burnt down. Many white men were held hostage. King Koko tried to negotiate hostage release in exchange for free trading conditions but the Royal Niger Company refused. Several clerks and Kroo boys were killed whose heads were carried off to Nembe as trophies: many were brought as captives to Nembe, the majority of whom were executed in cold blood the next day at Sacrifice Island and feasted upon.

An 1896 report to the British Parliament claimed that King Koko killed and ceremoniously ate 43 hostages. How do you think the British reacted?

On 20th of February 1895, the British Royal Navy attacked Nembe killing about 300 people and burning the town. The same day, King Koko attacked with his war canoes and sunk 3 British ships. Many British forces were killed. King Koko eventually ordered his war canoes to surrender to avoid further casualties and burning down of Nembe villages.

In April 1895, peace and business activities returned to Nembe. Brass was fined £500 by the British. King Koko returned several cannons and a machine-gun looted from Akassa. There was then an exchange of prisoners between King Koko and the British.

In April 1896, after King Koko refused the terms of a British settlement that allowed Brass people into the markets, he was declared an outlaw. Koko fled to Etiema, a remote village in the hinterlands, where he died in a suspected suicide in 1898.

The next year, the charter of the Royal Niger Company was revoked by the British, an act seen as partly a consequence of the short war. King Koko of Fantippo, a character in the Doctor Dolittle books of Hugh Loftings (1886-1947), appears to be based on the real King Koko.

Do you think he really ate those men or was that part of the report submitted to the British Parliament made up?

See How to Link Your NIN with your Mobile Phone Number

See the Famous Queen of Madagascar Who Killed Half The Population of Her...