Are you a lover of cats and do you have any? But can you imagine there is a place in Japan with more cat residents than humans? An island for this exist and its called the Aoshima Island. All cat lovers please unite here! Today i would like to introduce you to one of Japan's famous cat islands. So read below. 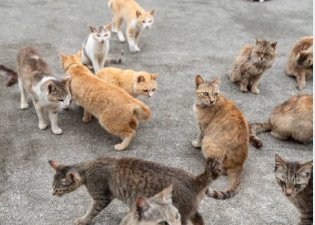 I would like to tell you more about this place. Its called the Aoshima, also known as Cat Island. Its a 1.6km island in the Ehime Prefecture of Japan, known for its large numbers of cat residents. it's nickname "Cat Island" is no exaggeration because there are only 15-20 residents on the island but more than 120 cats, about 6 times the human population on the island.

You would like to know that the cats were at first brought to the island to kill rats that Iive around fishing boats. But as the human populace on the island dropped, the felines remained on the island and kept multiplying!

The human population has dropped since sardine fisheries depleted and jobs moved to cities, causing human residence on the island to drop.

Other cats islands in Japan

Apart from Aoshima island, There are other cats islands in Japan where cats tend to stay and even outnumbered humans. Let me briefly share some here with you.

This is another famous cat island in Japan. It's a small island off the mainland of Japan in Ishinomaki, Miyagi Prefecture. The population of the island is around 100 people but there are more than 100 cats on the island. The island was known then to raise silkworms for their silk which naturally offcourse would attract mice, and the introduction of cats helped this production as the cats kept the mice population to a minimum.

It is believed that locals on the island have been doing fishery for years and feeding the cats which they believe will bring wealth and good fortune. The cats have become a sort of mascot for the island, so because of this no pet dogs are allowed on this island, so the island literally is a "cat island".

CHECK THIS: A Story of Japanese Prisoner who escape Cell 4 times using a local soup meal!

Lastly about this unique island is a shrine at the centre of the island called Neko-ninja, situated between two villages. It devoted to cats that died due to falling rocks on the island.

This is another cat island in Japan. Compared to our subject matter, the Aoshima Island and the Tashiro-Jim's Island, Enoshima is a destination much easier to access for all cat lovers out there. Its a small offshore island located in the Southwest of Tokyo and its the closest island near Tokyo, about 4km in circumference in the Kanagawa Prefecture,  Japan.

The cat population on this island has increase since 1980. They are now being cared by the locals and residents after they were originally abandoned here. Just like humans though, cats have their own individual personalities, and may not enjoy pats, so please use caution and heed the rules set by locals.

Compared to other two cats Island listed above, the Manabeshima (also known as Manabe Island) is a much smaller island located in Kasaoka City of the Okayama Prefecture. You may need a train or ferry to access the island. A peaceful residential island to go, which creates the quite peaceful life for cats. Visitors are sure to be greeted by cats wherever they go, infact, there may be more cats than people!

Before you visit Aoshima Island -wait!

Aoshima Island is not designated for tourists, and there are no hotels, shops, restaurants, or even vending machines on the island. Visitors should bring their own food and drink, and take all their garbage home with them. Most of the people living on the island are elderly,  so please be respectful of the residents -both human and feline - during your visit.

Was this articles interesting and educative to you? Why not share it to someone else who may like to read it too by using one of our social media buttons below.

Mount Nyiragongo - The Volcanic Mountain that Erupted recently in Africa

How to apply for a Federal Government of Nigeria loan