Foreign nationals in the United States have a diverse range of career opportunities. Living and working in a foreign country, being immersed in a different culture, and meeting new people may all be rewarding experiences. Some individuals come to the United States permanently for education and work, while others come for a specific length of time. 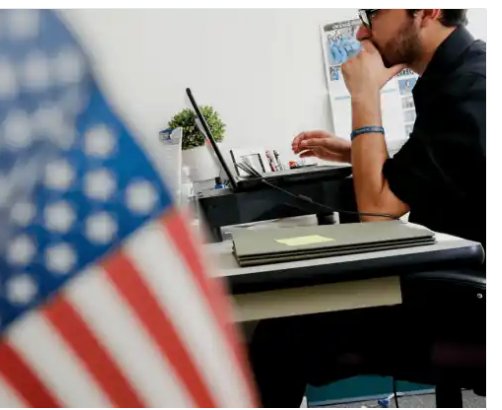 Depending on your professional objectives, you will require a different form of visa and work permit. There are numerous options for foreign people interested in working in the United States.

Green cards (permanent residency) based on employment, exchange visitor work and study visas, and seasonal and temporary worker visas are only a few examples.

Here you’ll find information about working in the United States, including work visas, green cards, and the green card lottery, as well as tips on avoiding visa frauds. Because the visa application procedure might take a long time, apply far ahead of your planned immigration date.

To work in the United States, foreign people who are neither American citizens nor lawful permanent residents must get a work visa as well as a work permit, formally known as an EAD.

For foreign nationals who desire to work in the United States, there are various types of work visas available, including seasonal work visas, temporary work visas, and exchange worker visas.

You must first acquire a visa from the United States Embassy or Consulate in your home country or the nation nearest to your foreign residency before traveling to work in the United States.

Permanent immigrant employees, temporary (non-immigrant) workers, and student and exchange workers are among the foreign workers who are authorized to work in the United States.

Some categories, however, require a certification from the United States Department of Labor demonstrating that there are not enough able, willing, qualified, and available American workers in the geographic area where the immigrant will be employed and that no American workers will be displaced by foreign workers.

Each year, this program awards up to 50,000 green cards to applicants who are chosen at random in a lottery known as the “Green Card Lottery.” Those interested in applying for the Green Card Lottery can do so online.

If you are a non-American citizen interested in working in the United States, you will need a social security number in order to do so.

If a person is neither a US citizen nor a lawful permanent resident, they will require a work permit, also known as an EAD, to establish their ability to work in the country. In addition to the work visa necessary for entrance into the United States, an Employment Authorization Document (EAD) will be required.

When looking for work in the United States, be wary of scammers that promise to help you acquire a visa. It’s essential to note that there are never any fees associated with applying for a work visa in the United States or obtaining US government application paperwork or instructions.

Individuals wishing to come to the United States and establish permanent residency may be eligible for immigrant visas if they have employment offers in designated occupations where U.S. employees are in short supply or in other particular categories.

These work-sponsored visas are separated into preferred categories, each with its own set of quotas, skill criteria, and per-country limits.

Employer sponsorship is required for the majority of employment-based nonimmigrant visas. That is, on behalf of the potential employee, the company applies to the US Citizenship and Immigration Services for a certain type of nonimmigrant visa (USCIS).

In some cases, permission from the US DOL is also necessary to show that the foreign national would not replace American employees. If the foreign person is lawfully present in the United States, the US Citizenship and Immigration Services grants a change of status, or the foreign national may apply for a visa at a US consulate.

The process of obtaining authorization for foreign employees to work in the United States is handled by a number of federal departments. Understanding the varied roles and duties of the many government entities involved can be difficult. This is the breakdown in broad terms:

Employers must apply for certification via the DOL in the United States. The employer must petition the US Citizenship and Immigration Services for a visa after the application has been certified/approved. Applicants must show that they are lawfully eligible to enter the United States.

After a visa petition is approved, the US Department of State (DOS) provides the visa if all requirements are met.

An employer can sponsor a job prospect or employee who already has a temporary nonimmigrant visa for permanent residency (immigrant visa).

Various applications for immigrant visas have different priorities. The following are the three most common in the workplace:

In general, the greater the priority group, the faster an immigrant visa may be obtained. Due to per-country quotas, inhabitants of certain countries, as well as those seeking lesser preferences, must wait years for their immigrant visas to be processed, when priority dates become current. See the U.S. Department of State’s website for the most up-to-date list of priority dates. The current Visa Bulletin from the Department of State.

If the beneficiary worker is lawfully in the United States, he or she can apply for adjustment of status or finish the processing at a U.S. consulate once the priority date is current as of the date of filing with the US Citizenship and Immigration Services or US Department of Labor.

Please share for others to see and understand better.

Beware of these Netflix scams that are running rampant online

Facebook Messenger has added end-to-end encryption to voice and video...