At least nine people, most of them children, were killed Tuesday when a lone teenage gunman opened fire at a school in the central Russian city of Kazan, officials said. 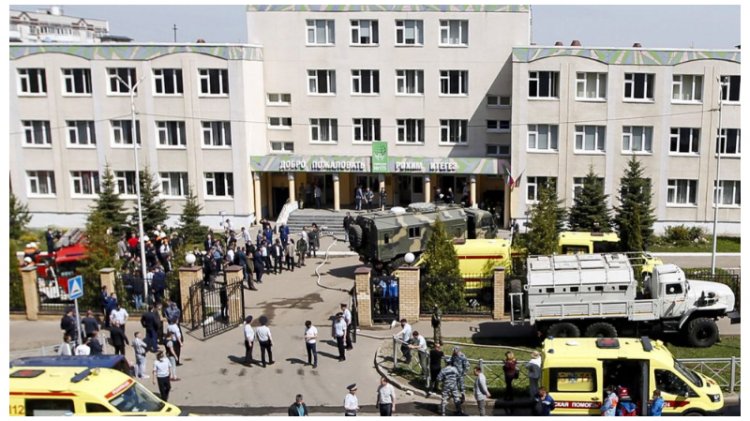 President Vladimir Putin ordered a review of gun control laws after the shooting — one of the worst in recent Russian history — which occurred on the first day back to school following annual May holidays.

The spree started around 9:30 local time (630 GMT), sparking panic among students and teachers at the School No. 175 in Kazan, the capital of the Russian predominantly Muslim republic of Tatarstan.

Amateur footage on social media, apparently filmed from a nearby building, showed people escaping from the school by jumping from second- and third-floor windows, with sounds of gunshots echoing in the schoolyard.

Police said they detained the gunman approximately one hour after initial reports of shooting.

Police said they detained the gunman approximately one hour after initial reports of shooting.

Seven of the dead were children in the eighth grade, Tatarstan regional leader Rustam Minnikhanov told reporters. He said two adults, including a teacher, also died.

Another 20 were hospitalised, including 18 children. Six of them were in intensive care, Lazzat Khaidarov, a spokesman for the regional authorities, told AFP.

The ages of the injured people varied from between seven and 62.

In the aftermath of the killings, authorities declared a day of mourning for Wednesday while Putin expressed his “deep condolences” to the victims and called for new gun laws.

“The president gave an order to urgently work out a new provision concerning the types of weapons that can be in civilian hands, taking into account the weapon” used in the attack, his spokesman Dmitry Peskov said.

‘Neat and calm’
Images broadcast on state television showed dozens of people outside the school with fire services and police vehicles lining nearby streets and law enforcement carrying automatic weapons patrolling the area.

The number of dead reported varied, with the city’s mayor saying eight people had been killed. Russian news agencies, citing official sources, said earlier in the day that 11 people had died.

The Interfax news agency, citing a nearby business college, identified the shooter as Ilnaz Galyaviev, who was enrolled at the Tatarstan University of Management but was expelled one month ago for poor academic performance.

He was always neat and calm, he was respectful of fellow students and teachers,” a representative of the university was quoted as saying.

There were initial reports of two shooters, with one reportedly barricaded on the fourth floor of the building and killed, but officials later said a lone attacker was responsible.

‘Deeply saddened’
Tatarstan leader Minnikhanov described the shooting as “a major tragedy for our republic” shortly after the building was secured.

“We are deeply saddened that this has happened,” he told reporters.

He described the detained assailant as a “terrorist” and said the 19-year-old shooter had a licence to carry a firearm.

A source told Interfax that Galyaviev had been armed with a Turkish-made Hatsan escort shotgun, the same weapon used in a mass shooting at a college in Kerch in Russian-annexed Crimea in 2018.

Officials ordered a minute of silence at football matches later Tuesday and both cabinet and parliament meetings honoured those dead in the attacks.

“I was in class, I first heard an explosion, then gunshots,” state news agency TASS quoted a student as saying in the wake of the attacks.

Elena, a Kazan resident who said she was outside the school, told the Echo of Moscow radio station earlier in the day that law enforcement was clearing people from outside the premises.

“Parents are crying,” she told the radio station. “People are hysterical.”

Do you know Google Maps is testing an awesome new dock feature that we...