Ferdinand Magellan; The Portuguese explorer who first sailed round the world

In search of fame and fortune, Portuguese explorer Ferdinand Magellan (c. 1480-1521) set out from Spain in 1519 with a fleet of five ships to discover a western sea route to the Spice Islands. En route he discovered what is now known as the Strait of Magellan and became the first European to cross the Pacific Ocean. See more below. 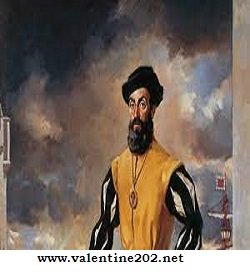 The voyage was long and dangerous, and only one ship returned home three years later. Although it was laden with valuable spices from the East, only 18 of the fleet’s original crew of 270 returned with the ship. Magellan himself was killed in battle on the voyage, but his ambitious expedition proved that the globe could be circled by sea and that the world was much larger than had previously been imagined.

Ferdinand Magellan (c. 1480–1521) was born in Sabrosa, Portugal, to a family of minor Portuguese nobility. At age 12 Ferdinand Magellan (Fernão de Magalhães in Portuguese and Fernando de Magallanes in Spanish) and his brother Diogo traveled to Lisbon to serve as pages at Queen Leonora’s court. While at the court Magellan was exposed to stories of the great Portuguese and Spanish rivalry for sea exploration and dominance over the spice trade in the East Indies, especially the Spice Islands, or Moluccas, in modern Indonesia. Intrigued by the promise of fame and riches, Magellan developed an interest in maritime discovery in those early years.

In 1505, Magellan and his brother were assigned to a Portuguese fleet headed for India. Over the next seven years, Magellan participated in several expeditions in India and Africa and was wounded in several battles. In 1513 he joined the enormous 500-ship, 15,000-soldier force sent by King Manuel to Morocco to challenge the Moroccan governor who refused to pay its yearly tribute to the Portuguese empire. The Portuguese easily overwhelmed the Moroccan forces, and Magellan stayed on in Morocco. While there he was seriously wounded in a skirmish, which left him with a limp for the rest of his life.

Magellan: From Portugal to Spain

In the 15th century, spices were at the epicenter of the world economy, much like oil is today. Highly valued for flavoring and preserving food as well as masking the taste of meat gone bad, spices like cinnamon, clove, nutmeg and especially black pepper, were extremely valuable. Since spices could not be cultivated in cold and arid Europe, no effort was spared to discover the quickest sea route to the Spice Islands. Portugal and Spain led the competition for early control over this critical commodity. Europeans had reached the Spice Islands by sailing east, but none had yet to sail west from Europe to reach the other side of the globe. Magellan was determined to be the first to do so.

By now an experienced seaman, Magellan approached King Manuel of Portugal to seek his support for a westward voyage to the Spice Islands. The king refused his petition repeatedly. In 1517 a frustrated Magellan renounced his Portuguese nationality and relocated to Spain to seek royal support for his venture.

When Magellan arrived in Seville in October 1517, he had no connections and spoke little Spanish. He soon met another transplanted Portuguese named Diogo Barbosa, and within a year he had married Barbosa’s daughter Beatriz, who gave birth to their son Rodrigo a year later. The well-connected Barbosa family introduced Magellan to officers responsible for Spain’s maritime exploration, and soon Magellan secured an appointment to meet the king of Spain.

The grandson of King Ferdinand and Queen Isabella, who had funded Columbus’ expedition to the New World in 1492, received Magellan’s petition with the same favor shown by his grandparents. Just 18 years old at the time, King Charles I granted his support to Magellan, who in turn promised the young king that his westward sea voyage would bring immeasurable riches to Spain.

On August 10, 1519 Magellan bade farewell to his wife and young son, neither of whom he would ever see again, and the Armada De Moluccas set sail. Magellan commanded the lead ship Trinidad and was accompanied by four other ships: the San Antonio, the Conception, the Victoria, and the Santiago. The expedition would prove long and arduous, and only one ship, the Victoria, would return home three years later, carrying a mere 18 of the fleet’s original crew of 270.

In September 1519 Magellan’s fleet sailed from Sanlúcar de Barrameda, Spain, and crossed the Atlantic Ocean, which was then known simply as the Ocean Sea. The fleet reached South America a little more than one month later. There the ships sailed southward, hugging the coast in search of the fabled strait that would allow passage through South America. The fleet stopped at Port San Julian where the crew mutinied on Easter Day in 1520. Magellan quickly quelled the uprising, executing one of the captains and leaving another mutinous captain behind. Meanwhile Magellan had sent the Santiago to explore the route ahead, where it was shipwrecked during a terrible storm. The ship’s crewmembers were rescued and assigned out among the remaining ships. With those disastrous events behind them, the fleet left Port San Julian five months later when fierce seasonal storms abated.

On October 21, 1520 Magellan finally entered the strait that he had been seeking and that came to bear his name. The voyage through the strait was treacherous and cold, and many sailors continued to mistrust their leader and grumble about the dangers of the journey ahead. In the early days of the navigation of the strait, the crew of the San Antonio forced its captain to desert, and the ship turned and fled across the Atlantic Ocean back to Spain. At this point, only three of the original five ships remained in Magellan’s fleet.

After more than a month spent traversing the strait, Magellan’s remaining armada emerged in November 1520 to behold a vast ocean before them. They were the first known Europeans to see the great ocean, which Magellan named Mar Pacifico, the Pacific Ocean, for its apparent peacefulness, a stark contrast to the dangerous waters of the strait from which he had just emerged. In fact, extremely rough waters are not uncommon in the Pacific Ocean, where tsunamis, typhoons and hurricanes have done serious damage to the Pacific Islands and Pacific Rim nations throughout history.

Little was known about the geography beyond South America at that time, and Magellan optimistically estimated that the trip across the Pacific would be rapid. In fact it took three months for the fleet to make its way slowly across the vast Mar Pacifico. The days dragged on as Magellan’s crew anxiously waited to utter the magic words “Land, ho!” At last in March 1521 the fleet reached the Pacific island of Guam, where they finally replenished their food stores.

Magellan’s fleet then sailed on to the Philippine archipelago landing on the island of Cebu, where Magellan befriended the locals and, struck with a sudden religious zeal, he sought to convert them to Christianity. Magellan was now closer than ever to reaching the Spice Islands, but when the Cebu asked for his help in fighting their neighbors on the island of Mactan, Magellan agreed. He assumed he would command a swift victory with his superior European weapons, and against the advice of his men, Magellan himself led the attack. The Mactanese fought fiercely, and Magellan fell when he was shot with a poison arrow. He died on April 27, 1521.

Magellan would never make it to the Spice Islands, but after the loss of yet another of his fleet’s vessels, the two remaining ships finally reached the Moluccas on November 5, 1521. In the end, only the Victoria completed the voyage around the world and arrived back in Seville, Spain, in September 1522 with a heavy cargo of spices but with only 18 men from the original crew.

Seeking riches and personal glory, Magellan’s daring and ambitious voyage around the world provided the Europeans with far more than just spices. Although the trip westward from Europe to the east via the Strait of Magellan had been discovered and mapped, the journey was too long and dangerous to become a practical route to the Spice Islands. Nevertheless, European geographic knowledge was expanded immeasurably by Magellan’s expedition. He found not only a massive ocean, hitherto unknown to Europeans, but he also discovered that the earth was much larger than previously thought. Finally, although it was no longer believed that the earth was flat at this stage in history, Magellan’s circumnavigation of the globe empirically discredited the medieval theory conclusively.

I wonder why President Buhari thanked Britain for Nigeria’s unification...

How to apply for Tony Elumelu Foundation (TEF) Entrepreneurship Programme...